Honorable Jeanine M. Cooper, Minister of Agriculture, was born unto the union of the late Hon. Julius E. Cooper, Sr, an Agronomist by profession and the late Mrs. Milly Buchanan, an Architect, Translator and Artist. Both parents served the government of Liberia honorably for many years and the Minister received from them, an appreciation of service and a dedication to Liberia. She was born at the LMC Hospital in Bomi Hills, Bomi County in 1960. Minister Cooper, graduated from the College of West Africa in Monrovia, Liberia and went abroad to further her education.

She graduated from Michigan State University in 1982 with a double B.A. in Business Administration and in French; and she has an MSc in Managing Rural Change from the University of London, Imperial College at Wye in 2003. Ms. Cooper earned a distinction for her dissertation on Capitalizing on Livelihoods in Liberia’s Rubber Sector to Anchor Post-Conflict Reconstruction.

Minister Cooper, returned home to Liberia in the 1980s and immediately started working in the agriculture sector, first as a registered rubber buyer with Firestone and subsequently managing and operating her family farms: King Farm in Lower Careysburg; Buchanan Farm in Cinta and Ora Gene Farm in Vahnyeamah, both in Margibi County. Upon the outbreak of the Liberian Civil conflict she worked with the first team of Mèdecins Sans Frontières – Belgium, from 1990–1996. She founded a local NGO in Liberia, the Children’s Assistance Program, which has served youth since 1991 and is a leading partner in child development. She also managed pastoral livelihoods and livestock programs in northeastern Kenya and southern Somalia with Vétérinaires Sans Frontières-Suisse (VSF-S) from 1996-2003. Mde. Cooper has supported community-initiated agricultural projects and served on the board of directors of developmental bodies and educational institutions in Liberia and in Côte d’Ivoire.

Following her time with VSF-S, Mde. Cooper served 13 years with the United Nations. Her last posting was as the Permanent Observer to the African Union and the Economic Commission for Africa and Head of the Liaison Office for the U.N. Office for Coordination of Humanitarian Affairs (UN-OCHA). Ms. Cooper also held postings with the UN-OCHA in Kenya and for the Eastern and Southern Africa region.

Honorable Jeanine Cooper founded FABRAR Liberia, currently Liberia's largest rice processor and producer, in 2009 and was managing the company from January 2017 to 2020. She relinquished her roles in FABRAR after being named as Minister of Agriculture. Minister Cooper put her shares in her Fabrar Liberia Incorporated into what she termed as "Blind Trust. "Her action is intended to avoid any conflict of interest with her new role at the Ministry of Agriculture. "In this public forum, I like to say something about my company FABRAR, which I was running peacefully before, but which I have now put my shares into a blind trust so that I can focus my attention on the affairs of the Ministry,"  she said in published articles ran by the Front-Page Africa (March 5, 2020) and Daily Observer (March 6, 2020).

In January of 2020, H.E. George M. Weah, President of the Republic of Liberia, nominated Mde. Cooper to serve as Minister of Agriculture, Republic of Liberia. She was confirmed unanimously by the Liberian Senate and subsequently commissioned by the Liberian President. The new minister has detailed a vision of transformation of Liberian agriculture; a vision centered on elevation of Liberian farmers from subsistence farming to commercial smallholders. A vision to ensure the supply of quality agricultural products produced in a sustainable and organic manner prized in today’s market. A vision of a new direction for the Ministry of Agriculture, focusing it as a service-oriented entity.

She has completed several certificate courses on business and entrepreneurship and has published several blogs and short stories. Ms. Cooper is perfectly bi-lingual in English and French, with a working knowledge of Dutch.

Jeanine Cooper is married with three children, and one grand-daughter. 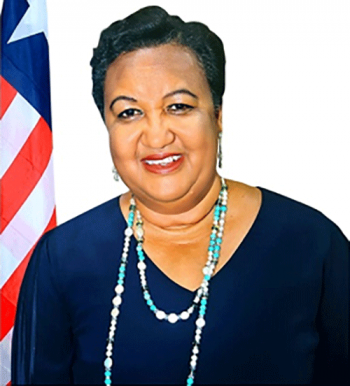